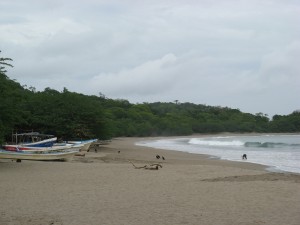 Despite the rain, I decided that it would be nice to have a bit of a break today. (I know I’ve only been in town a couple of days but it feels like I never left – which is a good thing). Anyway, I hired a car and myself and my friens Luis drove (well he drove as I’m still chicken and I shouted at him to keep his hands on the wheel and his eyes on the road – nothing like an over expressive cocky bloke driving you around!) South. We went to a beach called El Gigantes. Once again I am astounded at the fact that the beaches here are these wide expanses of emptiness. A few shacks scattered around but no developments and few people. We ate £10 lobster and took in the crashing waves, driving rain and peace. Then off to San Juan Del Sur (nearly getting stuck in a ditch with hideous hire car consequences). There, a research mission to one of the best hotels in Nicaragua – Pelican Eyes  – and very nice it is too. I left with their spa price list – handy! A quick dose of (watching for me) beach volleyball and then the  dark journey back with me as back seat driver extraordinaire!

I met up with Canadian friends Rob and Janek and then went onto Heidi’s bar – a veteran of the Granada scene and what fun. Had a few beverages before finally hitting by bed.

Sunday was spent as Sunday should be – watching football. Spain beating Germany was sweet as can be – Hans from Cayuga won’t be happy, but I was!

This entry was posted in Karen's Island. Bookmark the permalink.